This post expands on the article I wrote for ELTA newsletter.  The post consist of two parts. Part 1 focuses on the definition and components of fluency, while Part 2 suggest practical ways of developing fluency and addressing specific issues hindering fluency. 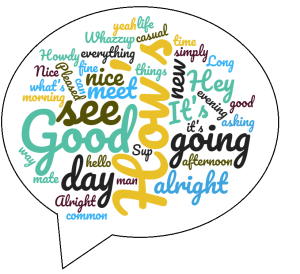 Whether you are teaching English as a second or foreign language, in a private language institution or a state university, a large number of students will say that the reason they want to learn English is ‘to be able to speak English fluently’.  Moreover, upon reaching a certain level of English proficiency, learners are expected to demonstrate increased fluency – a look at textbooks of B1 level and above will show you that they include increasingly complex speaking tasks which require students to produce longer stretches of language. However, in my experience, learners are not given enough resources and strategies that allow them to consciously work on developing their speaking fluency. So how DO we help our students get there? Let’s start by figuring out what fluency actually is.

On the face of it, it seems simple enough: fluency means speaking English ‘easily’ and, in order to become fluent, you just have to practice speaking. However, fluency is a complex phenomenon and developing fluency requires more than just practicing speaking. This post  will focus on speaking fluency, which is arguably one of the most important aspects of language proficiency – after all, we ask people if they speak English (or any other language) rather than read, listen or write in it.
Various definitions of fluency emphasize its different aspects, such as speed of delivery, discourse features, and automaticity of production. Richards & Schmidt, for instance, define fluency as “the features which give speech the qualities of being natural and normal, including native-like use of pausing, rhythm, intonation, stress, rate of speaking, and use of interjections and interruptions” (2002:204). Additionally, Nation & Newton (2009) define fluency as an observable skill demonstrated when learners take part in a meaning-focused activity with speed and ease and without a great deal of effort and attention.

So where do this ease and speed and lack of effort come from? Conventional wisdom is that fluency comes form practice – lots and lots of it. The more you speak, the better you will get. I cannot disagree with this and, certainly, many others in the field have the same idea in mind. For example, Nation & Newton (2009:157) suggest “repeated practice on the same material so that it can be performed fluently” as an effective approach to developing fluency. But there are some other factors that underlie fluency and they will come into light below as we discuss what might impede fluency.

… and where does it hide?

In order to understand how fluency can be improved, I suggest looking at what gets in the way of fluency. There are several factors that hinder speaking fluency and we will look at them in detail before moving on to some suggestions on how to alleviate these difficulties.

As language teachers, we have all been there: a student excitedly wants to tell us something. They start telling their story and then… get stuck.  When learners have to
search for words/phrases as they speak, they invariably slow down, hesitate and pause. This hinders fluency and makes it difficult for learners to get their message across. Additionally, learners can become stuck trying to remember a word they need, constantly referring to their dictionaries or the help of their classmates or the teacher.

Students from some countries, e.g. Russia, often complain that their mistakes aren’t being corrected enough. I have seen students come out of speaking clubs, disappointed that in the 2 hours of them speaking, not once did someone point out numerous grammar errors they are certain they had made. What they (and sometimes teacher) don’t realize is that there is time when we work on fluency (e.g. by spending 2 hours speaking English at a speaking club) and then there is time to work on accuracy (e.g. after you have just covered a grammar point). Richards & Schmidt, (2002: 204) point out that fluency is usually “contrasted with accuracy, which refers to the ability to produce grammatically correct sentences”. In practical terms, distinguishing between fluency and accuracy means setting different activity aims (i.e. focus of message vs focus on form) and different classroom procedures, where fluency work often means pair work and delayed feedback (Scrivener, 2011).

Another factor that may negatively affect fluency is affective, i.e. emotional factors  They include a number of non-linguistic issues that may have a negative impact on
developing speaking fluency because they inhibit learners’ willingness to engage in speaking activities. One such factor is anxiety related to speaking English in front of other people, which can be caused, for instance, by a non-cooperative atmosphere in the classroom. When I was teaching young Turkish adults, learners who spoke up in class and were seen to make an effort were met with ridicule. Consequently, whole-class speaking activities were nearly impossible to run.

Anxiety can also be caused by fear of making mistakes. In Russia, learners are often put off speaking for this very reason (“I won’t be speaking English until I can speak it perfectly!”). Additionally, learners from the countries where the teacher is seen as the main source of knowledge, do not see the value of speaking to peers and thus are reluctant to participate in speaking activities. I have often heard students say they don’t want to ‘catch’ other people’s mistakes – as if they were fleas!

When English learners first start learning language, they are very quickly able to say things like ‘My name is ….’ and ‘Where are you from’ fairly quickly and tend not only to remember these phrases for a long time but also to retrieve them from their memory with very little effort. What’s the secret? Automatic processing, a psycholinguistic process that contributes to speaking fluency. It’s defined as “the performance of a task without conscious or deliberate processing” (Richards, J. C., & Schmidt, (2002:42). Wood proposes that fluency is achieved through “automatization of elements of speech” (2001:579). This means that instead of formulating what they need to say, fluent speakers retrieve the language in pre-made chunks which are stored in the long-term memory as a single unit. These chunks are also called formulaic sequences, defined as “fixed combinations of words that have a range of functions and uses in speech production” (Wood, 2009:13). For instance, even elementary-level learners are usually able to produce phrases like ‘Fine, thanks’, ‘Yes, please’, and ‘Happy Birthday’ fairly effortlessly. Formulaic sequences also include sentence stems (I would like to), collocations (make dinner), and discourse markers (you know).

Having to build utterances word by word instead of using chunks negatively impacts fluency because it reduces the rate of speech, and leads to a lack of linking between words. The latter is important because chunks are not only stored and retrieved as one word, they “exhibit phonological coherence” (Wood, 2001:579), e.g. Do you know what I mean is pronounced as /dʒənəʊwɒdɑɪmɪn/.

Think about it – you ask someone a question. As you wait for them to reply, they look at you, letting the silence stretch on. What’s happening? Did they hear you? Did they understand? Are they going to answer? Communication has barely began and already there is a breakdown looming. Now, what if they said something like, “Um, I`m not sure, l mean, you know, it’s a difficult question… ” you would know that your question was heard and the answer was coming.
Thornbury (2005) suggests that pausing is an important aspect of fluency. Pauses are considered in terms of their frequency, length and placement. Frequent and prolonged pauses are undesirable and in order to sound natural, pauses should be placed at the intersection of clauses. Fluent speakers also use pause fillers to avoid prolonged silent pauses. Pause fillers include sounds such as er and erm, discourse markers (I mean), vague expressions (sort of) and time-buying devices (Let me see…). In view if this, we can see how problematic it can be when learners do not use pause fillers, producing silent pauses instead, which “may contribute to an impression of lack of fluency” (Thornbury, 2006:158). In my experience, learners may avoid fillers because they may think of them as unsophisticated. For instance, in Russia, fillers are called ‘parasite words’ and considered to be a sign of poor vocabulary. Learners may also be unaware of the importance of fillers because textbook dialogues rarely contain authentic hesitations and other fillers.
Conversely, learners may overuse fillers to the detriment of their perception as fluent speakers (I, like, erm, work in er an office). Some learners unconsciously resort to using expressions from their L1 as discourse markers. For example, my Spanish-speaking student would say Como se dice? (How do you say) every time she struggled to retrieve vocabulary during speaking. Turkish learners often precede their English utterances with yani, a discourse marker meaning so or well.

With so many obstacles, is it any wonder that fluency seems so elusive? But despair not – I have quite a few practical suggestions on how to deal with all those obstacles outlined in Part 2 of this post.

Want to cite this blog post? Use this handy-dandy reference guide which shows you how to cite blog posts using MLA, APA or Chicago

1 thought on “The Fantastic Speaking Fluency and Where to Find It: Part 1”